A regular fashion diet or a path to a healthier life, disease prevention and weight loss?

What is the Paleo diet?

The idea of eating Paleo originated in academia in the 1970s

Its founder is considered to be the American gastroenterologist Walter Voegtlin (Walter Lyle Voegtlin), who considered that people were more carnivores and should eat a low-carbohydrate diet based on animal fat and protein (considered that humans are anatomically closer to a predatory dog than to a herbivorous sheepi). That is, we would be much healthier if we returned to the eating habits of the Paleolithic, which ended about 11,000 years ago. For this reason, this diet is also called the Stone Age diet.

The main idea of the Paleo diet is as follows: our bodies have not adapted quickly enough to modern agricultural practices and all the subsequent offers of the food industry.

It is recommended to stick to the (possible) eating habits of our ancestors - you need to eat a lot of meat and fish, fresh fruits and vegetables, as well as eggs and nuts. But the diet is very restrictive, excluding grains, refined sugar, processed foods, dairy products and even legumes such as lentils and beans.

Proponents of the diet believe that eating this way can help people avoid many of the problems of modern life, from obesity and heart disease to diabetes, cancer and even pimples.

Today The Paleo Diet® advertises itself as follows: “The Paleo Diet® is the diet that humans as a species are best suited to. In other words, by following the Paleo diet, you eat the optimal foods for your body that are literally programmed into your DNA. ”

Well, quite ambitious - isn't it? Read on and find out how true it all is.

How did our ancestors actually eat?

Scientists have long refuted the myths behind the Paleo diet:

It is really surprising that there are still people who believe these statements - they believe that people in Africa ate like those who lived on the Chukchi Peninsula or in the deserts of the Middle East. There are probably millions of different Paleo diet variations. Of course, meat played an important role in the menus of all tribes, but at least as much cereals also played an important role and the legumes, which were also gathered and used for food, were not in vain called man-gatherers at that time.

Also, the claim that people are more biologically adapted to eating meat does not stand up to criticism. A simple example - Vitamin C (ascorbic acid) is needed by absolutely all mammals. Carnivores (who do not eat plants) can produce it themselves, but humans can only take it with food. We have a longer digestive tract than predators because plant food is harder to digest and therefore has to stay in our body longer.

You can read more about vitamins HERE.

Has our body evolved and adapted to other foods

The assumption that we are adapted to eat only the same foods as our predecessors 11,000 years ago is more than strange.

One of the basic principles of evolution is that those who are able to produce more offspring survive. Respectively, natural selection favors only traits that improve our ability to have more children - who are able to survive and in turn give birth to children, thus passing on genes to future generations. So I would say that we are fine with adapting to modern food, and that many, if not all, assumptions about the Paelo diet are foolish and, in particular, that the evolution of humans as a species has come to a halt at the beginning of the agricultural era.

Another thing is that we have become less physically active and lazy, that we crave the conveniences that we receive from INDUSTRIALLY PROCESSED food, that we consume TOO MUCH of sugar and salt and contaminate our bodies with a variety of fully synthetic and non-natural substances. This is really a PROBLEM and that is why I tirelessly urge people to cook more themselves using fresh, unprocessed food.

But I am clearly not in favor of justifying an unhealthy diet and lifestyle with a lack of time and all sorts of self-inflicted allergies, food intolerances - and the search for 'miracles' that will get rid of both the weight gain and the associated health problems 'quickly and effortlessly'. problems.

Yes, just like any other restrictive diet. There are also some studies that following the Paleo diet loses a little more weight compared to some other diets, but does this prove that Paleo is better than e.g. Atkins or Keto, or any other low carb diet?

Weight loss is not due to the exclusion of dairy products, cereals and pulses from the diet, but to the fact that less energy is consumed than is consumed and the body begins to process its 'internal reserves' to meet its energy needs.

The menu must be balanced - eating mainly meat, fruits and vegetables without bread for a long time, dairy products, pasta, beans - is not realistic, and returning to previous eating habits is likely to return excess weight. In addition, excluding legumes, cereals and dairy products rich in vitamins and minerals from your diet will increase your risk of various nutrient deficiencies, which in turn can lead to various health problems. Is it really worth torturing yourself and hoping for a miracle based solely on vague logic and misinformation?

The UK Association of Nutritionists warns of the dangers of the Paleo diet and also in the US News annual diet review, the Paleo Diet is rated a paltry 2.4 out of 5, including:

Unlike, for example, Mediterranean diets, which has developed naturally over the centuries in the Mediterranean - the Paleo diet is artificially created based on the views of some theorists about how their ancestors in the Stone Age may have eaten and assumptions about how this style of eating could affect us today.

In the Stone Age, the processing of products was significantly different, with practically the only treatments being the frying and / or drying of meat and fish.

Then, well, proponents of the Paleo diet - be consistent - eat, as in the Stone Age - raw, fried and sun-dried meat and fish and raw, fresh vegetables. Remember that no sauces, dressings, etc. nor was it - so that in one hand raw meat or fish, in the other unpeeled beet and forward, towards a healthier life -.

Eat healthy and be healthy!

Tell us what you think about this topic

PrevPreviousBloating - how gas is formed in the belly and how to reduce bloating
NextAre dairy products good or bad?Next

I recommend reading these articles as well

Why is the Dican diet considered the most dangerous and is increased protein the basis for effective weight loss?

What are carbohydrates and why shouldn't you give up carbs if you want to lose weight?

Why carbohydrates are "Good" or "Bad" and why you need them, especially if you want to lose weight.

The best sources of fiber

Eat more fiber - one of the most common recommendations of nutritionists. But do you know what fiber is and why it is needed? 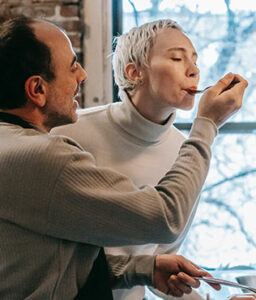 According to several scientists, our physical health depends on lifestyle and diet for 50%, for heredity and environmental influences for 20%, and only 10% for medical care.

About a healthy diet and lifestyle

Test your knowledge of healthy eating

The January slimming challenge will begin after